A perfect addition to your shower area.

*this .pdf template will print on a single sheet of 11×17 tabloid paper. If you cannot print that size, you can print it in sections and piece it together. Essentially, the piece is a 1/4 slice of a 20″ circle (so it is only 10″ wide) plus, the addition of a 5″ piece to create width of mat.
1. Make your pattern piece. Print 2 of your pattern piece. Cut along the long edge of a single piece and then align it to the dotted line of another. Tape in place. Trim the completed pattern piece on the line. 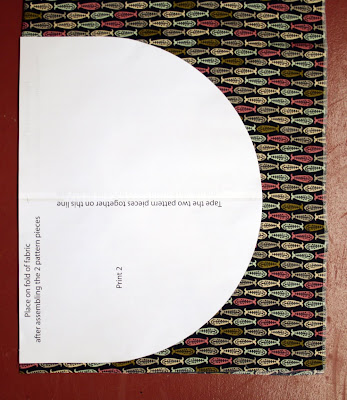 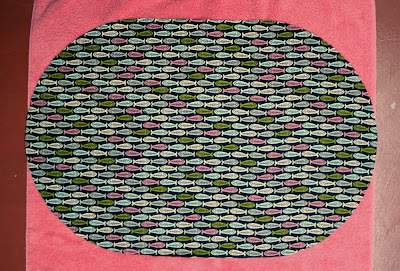 3. Cut your terry. Lay the fabric over a freshly pressed terry. With a marker, outline the fabric with the addition of anywhere to 1/4″ or 1/2″ extra. It is not important to be too accurate here, but you definitely want the terry piece a little larger than the fabric piece.
*As you might notice, we cut it very close here and when it came time to sandwich our pieces together we were wishing we had a little more wiggle room. 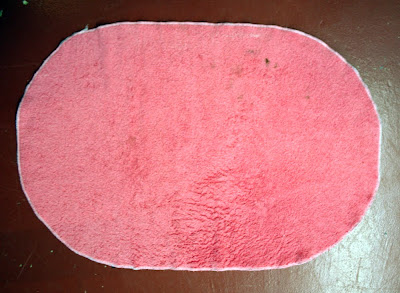 4. Finish the edge of the terry. If you have a serger it will be much easier, but it can still be done with a regular machine. This will save lots of little loopy fray fragments from getting all over your project.
4a: Serger: trim the terry leaving up to 1″ excess around. Your serger will trim as you go. Serge right on the line you drew allowing your machine to trim the excess.
4b: Sewing machine: trim on the line you drew. Using a zig zag stitch on the widest settings edge the entire terry piece.
Press when finished. 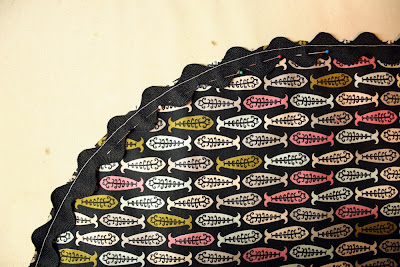 5. Attach the ric rac to the top fabric.
5a. Ric rac can pucker your fabric edges, so when you’re done, expect it to be a little bumpy along the edge. Pin the ric rac in a place so that when you sew your 1/4″ seam, it will be in the position you want it. For me if left about 1/8″ at minimum exposed.
5b. Make sure to tuck under edges of ric rac and make it tidy at the ends. Be sure to place this seam in a rather inconspicuous area- I made it happen about 1″ into the straight edge of the mat- this way it was not on the curve, nor was it in the center of the mat which could be distracting.
5c. After you pin, baste 1/8″ from edge of fabric. Press to flatten ric rac, but be careful if it is polyester, as the iron might make the puckering worse. You just want to give it a decent pressing to smooth it out a bit.
6. Pin the pieces together. Layer the top fabric to the terry, right sides facing. Make sure your front fabric is centered within the terry oval. Pin in the center of the oval. From there, smooth out the fabric to the top- pin. Smooth to the bottom – pin. Smooth to the left- pin (this curved edge is where the ric rac curls up the most, so be sure to flatten it down well and secure with a pin. Do the same to right side. Now, while continuing to smooth, keep pinning all around the circumference of the oval, be sure to keep the fabric edges from curling by pinning well. This should do the trick as the terry will pull it back into place once pinned. 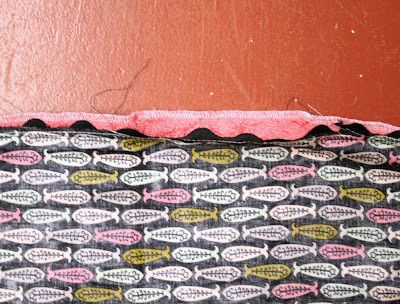 7. Sew the mat pieces. Sew 1/4″ from the FABRIC edge all along the circumference leaving a 6-8″ section open for turning inside out. It is IMPERATIVE you do this along the straight edge. It makes sense to do it in the same location as your ric rac seam as well. 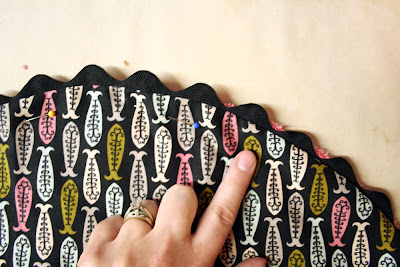 8. Turn inside out. Turn the mat inside out and smooth out the edges. You will need to fuss a bit at this point. Working from the top of the mat, use your fingers to push the seam flat along the ric rac and fabric, while simultaneously, pushing the terry under the mat so you can’t see it. Pin well as you go along and if you seen the terry peeking through, just go back and roll it under some more.
9. Secure the opening. In the area where the opening is, you’ll note that the ric rac is not stitched as deep as where it’s been sewn into the terry. So, using your fingers, press the fabric into the ric rac at the same distance to make the seam look continuous from the front. Give a little press with the iron to keep the crease.
9a. Roll the terry under and inside the mat in much the same way, so that it look continuous from the back. Pin well.
10. Topstitch. Topstitch about 3/4″ from the seam where the fabric meets the ric rac. It is easiest to topstitch here first as the terry creates a bit of thickness. Once you go all the way around the circumference, give it a press.
10a. Next, topstitch a scant 1/16″ from the seam where the fabric meets the ric rac – this will give it a nice clean flatness as well as seal up the opening. Press.
Enjoy!!

This site uses Akismet to reduce spam. Learn how your comment data is processed.